Biden administration’s new National Security Policy (NSS) offers a realistic view of Washington’s foreign policy and international conduct. It highlights that despite numerous domestic problems, the US remains a mighty, successful and durable great power that pragmatically, consistently and doggedly pursues its interests. The US will continue trying to build a world order centred on the US and counter any attempts by other countries to challenge it or pursue a policy threatening US interests and values.

The NSS 2022 declared the need for the United States to confront the authoritarian great powers for the right to shape the new international order, to unite and lead “the free nations” in countering cross-border threats (or, according to NSS 2022, shared challenges) and “anti-democratic forces.” A revealing passage states that the problems of US opponents in international and domestic affairs “are associated with the pathologies inherent in highly personalised autocracies.”

According to the NSS 2022, the most pressing challenge is from powers that layer authoritarian governance with a revisionist foreign policy. Russia and China are listed in this category. It goes on to assert that “Russia poses an immediate threat to the free and open international system,” whereas China “is the only competitor with both the intent to reshape the international order and, increasingly, the economic, diplomatic, military, and technological power to advance that objective.” It is stressed that although Russia, Iran and the DPRK are still posing a threat to the United States, the main challenge is posed by China and is not limited to the Indo-Pacific, it is becoming increasingly global. Compared with the NSS 2017, the new strategy admits that the threats from Iran and the DPRK have diminished against the backdrop of challenges from China and Russia.

According to the NSS 2022, “Beijing has ambitions to create an enhanced sphere of influence in the Indo-Pacific and to become the world’s leading power.” The new strategy is accusing China of what is so typical for the US itself. It notes that China wants “to create more permissive conditions for its own model, mould global technology use and norms to privilege its interests and values, use its economic power to coerce countries, limit access to its domestic market, and make the world more dependent on itself while reducing its own dependence on the world.” It also notes that China is investing in its armed forces and wants to have greater global reach.

Interestingly, the NSS 2022 admits that “the PRC is also central to the global economy and has a significant impact on shared challenges.” It offers the following conclusion: “It is possible for the United States and the PRC to coexist peacefully, and share in and contribute to human progress.”

The US strategy towards China involves a combination of efforts to enhance the economy, build alliances and “compete responsibly” with the PRC. A special place is reserved for supporting the Indo-Pacific countries to resist Chinese “pressure.”

China and Russia are accused of “genocide and crimes against humanity in Xinjiang, human rights violations in Tibet, and the dismantling of Hong Kong’s autonomy and freedoms,” aggression against Ukraine, “weaponising energy for coercion,” and the world’s food problems, to name a few. 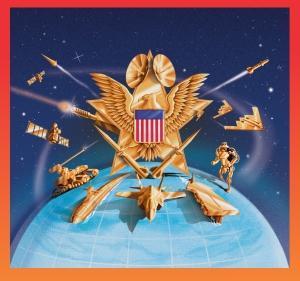 The NSS 2022 notes the critical role of the Taiwan issue for regional and global security and affirms the US desire to preserve the status quo: “We oppose any unilateral changes to the status quo from either side, and do not support Taiwan independence.” It reaffirms the US government’s “one China policy” which is guided by the Taiwan Relations Act (1979), the Three Joint Communiqués (1972-1982), and the Six Assurances (1982).

The NSS 2022 paints a gloomier picture on Russia: “Over the past decade, the Russian government has chosen to pursue an imperialist foreign policy… ” It goes on to say that the United States “made considerable efforts at multiple points to reach out to Russia to limit our rivalry and identify pragmatic areas of cooperation.” Russia “spurned these efforts…” The US does not share Russia’s idea about the ongoing conflict between Russia and the West. Together with its allies, it supports Ukraine in its confrontation with Russia, ensures the protection of NATO members and responds “to Russian actions that threaten core US interests.” The US is concerned that reliance on nuclear weapons in Russian policy may grow due to the weakening of conventional forces in the current conflict.  The United States “will not allow Russia to achieve its objectives through using, or threatening to use, nuclear weapons.” In its relations with Russia, “America retains an interest in preserving strategic stability,” arms control, “and in rebuilding European security arrangements which, due to Russia’s actions, have fallen in to disrepair.” The US refuses to admit to any responsibility for destroying security regimes and destabilising the situation in Europe as a matter of principle.

Despite the tough tone on China and Russia, the NSS 2022 is intended to de-escalate the great power confrontation. It notes that China and Russia are still interested in cooperation with states “that do not share their vision.” This leads to the following conclusion:

“As a result, the United States and our allies and partners have an opportunity to shape the PRC and Russia’s external environment in a way that influences their behaviour even as we compete with them.” The NSS 2022 also notes that the fundamental differences the US has with China and Russia are with their governments, not their people.

The NSS 2022 emphasises the US desire to avoid a conflict, a new Cold War or bloc-based confrontation. The last of these looks particularly devious against the background of the efforts to strengthen NATO and other military-political and economic alliances as much as possible, which reflect a desire to preserve Western unity and prevent the formation of alliances or coalitions of states that do not share US views on the world order. The Trump administration considered it enough to prevent the emergence of dominant states in the world’s key areas, whereas the goal of the Biden administration is to ensure the absolute dominance of the US and its allies and their views on the best way to structure the international order.

The NSS 2022 notes the US striving to avoid accidental military escalation, improve communication channels for contacts during emergencies, enhance transparency and start a dialogue on arms control. The US will also cooperate with China on the broadest range of issues but without deviating from its national interests.

The writer is a lecturer of Political Science.