Zalmay Khalilzad, an Afghan-turned-American professor, academician, politician and diplomat, and then a policymaker in various American policy circles, is a self-made man. He is an epitome of diligence, shrewdness, genius and influencer in a world full of flattery, leg-pulling and competition. The story of his life is an example of perseverance, commitment to excellence, paving ways for creating opportunities and identifying oneself as a man of crisis. All his traits, and stories, events and challenges he witnessed in his life, have been narrated by Ambassador Khalilzad in his memoir “The Envoy: From Kabul to the White House, My Journey Through a Turbulent World” – a book he authored on the insistence of Colin Powell, a former US Secretary of State, though Khalilzad himself had aspired to write a policy book. The instant memoir is full of his compliments for American culture, policies, strategies and almost every aspect of life. The stories and accomplishments he mentioned in this book give many lessons to the people, especially youth, living in underdeveloped and developing nations. It’s, indeed, a must-read piece for those who want to understand Afghanistan’s culture, world politics, US policies and strategies, and the covert and overt objectives of the long-drawn war on terror.
Born as Zalmay Mamozy Khalilzad to an Afghan government officer, Khalilullah, in 1951 in a village near Mazar-i-Sharif, Afghanistan, Ambassador Khalilzad was raised in the Afghan capital of Kabul. He was selected for a student-exchange program to California in his teenage, years where he was introduced to the American culture which he embraced and adopted very quickly. Inspired by the American culture, young Khalilzad was selected for undergraduate studies at American University of Beirut (Lebanon) and then for PhD studies at University of Chicago.
Khalilzad met his future wife Cheryl Benard, an academic scholar, writer, political scientist and novelist, in 1972 while they were both students at the American University of Beirut.
During his stay at the American University of Beirut, Khalilzad visited various cities of the Arab world and understood the dynamics of Arab nationalism and political scenarios. It was due to his understanding of Arab culture and politics that Bush administration chose him for holding negotiations with the Iraqi opposition to ensure that there is a regime change in the country. He also held a series of conferences in several Iraqi cities for de-Baathification of Iraqi politics and identifying future leaders of Iraq. 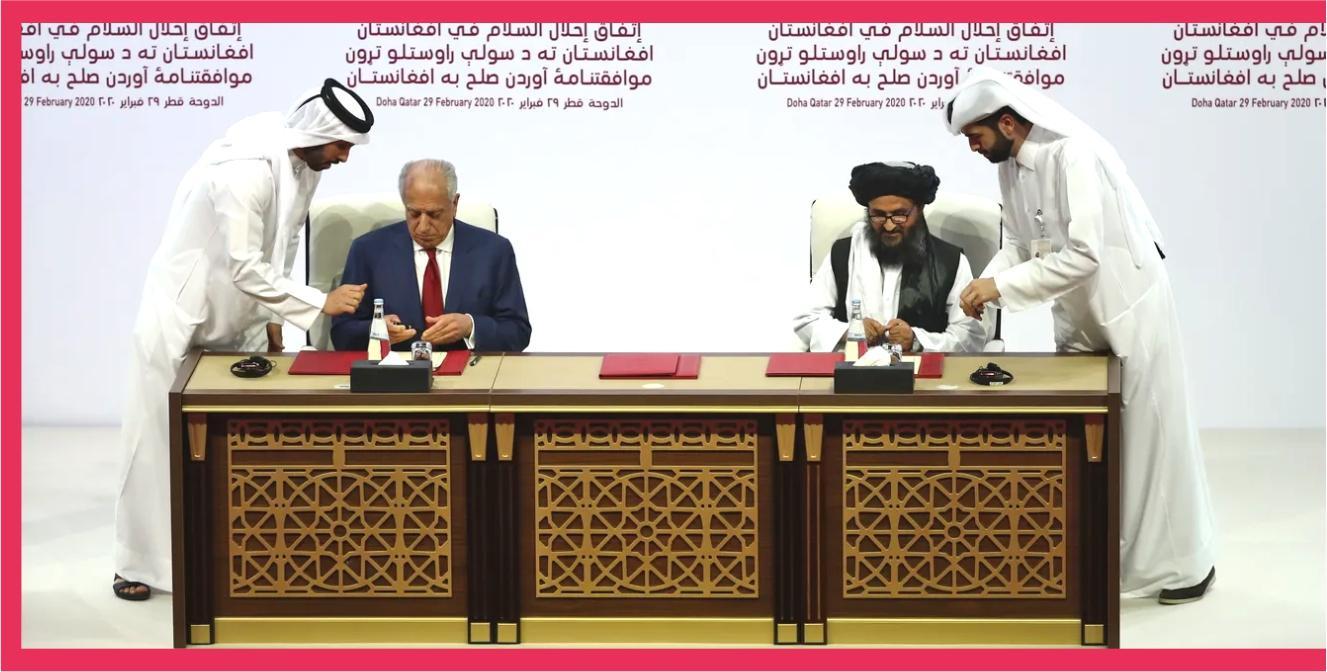 He served, from 1979 to 1989, at Columbia University’s School of International and Public Affairs as Assistant Professor of Political Science and Public Policy. It was the time when Cold War was at its peak and the USSR had invaded Afghanistan, which proved to be a blessing in disguise for Khalilzad as the US State Department hired him to help them in Afghanistan. Although Khalilzad was a severe critic of Pakistan and his approach was that of a typical rival towards Pakistan’s policies and government, he visited Pakistan to pave the way for negotiating a US reach-out to Afghanistan’s resistance forces. The reluctant strategist only approved Pakistan’s help with the notion of tactical requirement for attaining strategically justifiable ends. His malice towards Pakistan can be seen from his comments in the book regarding accommodation of refugees by Pakistan. He blames that Pakistan only gathered international aid through Afghan refugees and no facilities were provided to them at all. “Pakistan had won great international sympathy, not to mention aid and support, for taking in the refugees. Yet it became clear to me that Pakistan was exaggerating the cost and burden its government was bearing. In fact, Pakistan seemed actually to be profiting from the rise in real estate prices,” he writes in the book.
Nevertheless, Khalilzad had no other option as no one could have bypassed Pakistan in the whole game. So, he opted for cooperating with Pakistan for ending the Soviet occupation of Afghanistan.
Astonishingly, he reveals that he narrowly escaped death as he was supposed to be on a plane with General Zia ul Haq and American ambassador Arnold Raphel, but at the last moment he was ordered to go to Peshawar and meet Afghan resistance leaders, Hekmatyar and Rasoul Sayyaf. Khalilzad writes: “In August 1988, during one of my trips, the U.S. ambassador to Pakistan, Arnold Raphel, suggested that I meet Zia. I was supposed to join Raphel and Zia on a flight to a military base in Punjab. Just before the scheduled departure from Islamabad, however, Raphel changed his mind. Instead, he wanted me to go to Peshawar to meet with the Afghan leaders.”
In this book, Khalilzad has unequivocally accepted the blunder made by America of leaving Afghans on the mercy of warlords — a step that caused the outbreak of civil war and proliferation of militancy and extremism. In the book, Zalmay has narrated the events that led to the launching of War on Terror and his role as a ‘proud American’ in attacking Afghanistan and Iraq. His negotiating skills and influencing approach had made President Bush present compliments of “Zal: We all love you”. During his duties in Afghanistan as US ambassador, Khalilzad recalls his policies and strategies for framing new constitution for the country and shaping Afghan National Army to handle the looming resurgence of militancy and resistance from Afghan Taliban.
During his appointments in Afghanistan and Iraq, Khalilzad worked hard to implement the American plans of nation building in the former and installing new government in the latter. During all his official dealings, he also pointed out the institutional tussle between and among various departments of the United States over policymaking and implementation thereupon. His contribution to policymaking and understanding of America’s role in the world politics brought him a level that once he was under consideration for Secretary of State, in Donald Trump’s administration.
Moreover, it was due to his dual nationality and understanding of both the United States and Taliban that he was selected as US Special Representative for Afghanistan Reconciliation. The world knows how Khalilzad made marathon visits to every place he knew to persuade Taliban for negotiations. He settled in Qatar during those days and had formal and informal meetings with Afghan Taliban’s interlocutors Many Afghan Taliban were his friends; therefore, he had candid discussions with them, especially Sher Muhammad Abbas Stanakzai and Mullah Abdul Ghani Barader. It was only due to his perseverance and commitment that the long-awaited Afghan Peace Process came to a conclusion in February 2020 with the signing of an agreement in Doha, Qatar.
To conclude, it can be stated that the book “The Envoy: From Kabul to the White House, My journey through a Turbulent World” by Zalmay Khalilzad is an excellent read for the students of politics, international relations, history and aspirants of competitive exams. The book also presents a success story of a common man who rose to the position of a statesperson in a strange land and his unconditional loyalty to the new masters who had full confidence over his patriotism and potentials.

The Author teaches at department of Political Science, University of Malakand, Chakdara, Lower Dir. He can be reached at mairajulhamid717@gmail.com.