As Covid-19 affected everyone differently, it changed a lot the way we conduct our lives. One thing it taught everyone was: equitable access to Covid-19 vaccine is essential for global efforts toward recovery. In the beginning, people around the world waited impatiently for the vaccines against the deadly virus about which there was little credible information available. As news of developing a vaccine started surfacing, a new dilemma faced the world, and which, once again, laid bare the global divide between the Global North and the Global South. It was the inequitable supply of vaccines to the Third-World countries that ruptured the unity seen in response to the virus outbreak. Although the first vaccines started getting approval by March 2021, only 20.9% of the population living in low-income countries have, to date, received at least one dose of the Covid-19 vaccine. On the contrary, almost every human living in high- and middle-income countries [eligible for vaccination] had received his/her first dose by the end of 2021, according to the data collected by Oxford University.
The disinclination of global powers towards making their vaccine formulas available to every country has exposed the height of selfishness on their part, even in times of a global emergency. Vaccine diplomacy was used by world powers only to further their own interests, and not in the name of humanity. These big powers hid behind the shield of patents while selling expensive vaccines to other countries just to make millions off the pandemic, turning a blind eye to the dying human race. According to a report by Oxfam International, Pfizer/BioNTech and Moderna sold 90% of their vaccines to rich countries only, and that too at 24 times the cost of production. The high prices of vaccines and intellectual property hindrances kept production from moving to middle- and low-income countries.
To understand how patents prevented the world from fully benefiting from Covid-19 vaccines — by saving more lives — it is necessary to comprehend the idea behind intellectual property rights.
Intellectual property refers to the ownership of innovations and creations of mankind. Laws on intellectual property protect these through copyrights, trademarks and patents. They do it for striking a balance between the interests of the innovator(s) and that of the general public while encouraging productivity and innovation. A patent is a form of a right to intellectual property granted to the owner for a limited time, during which everyone else is barred from making, using or selling that. 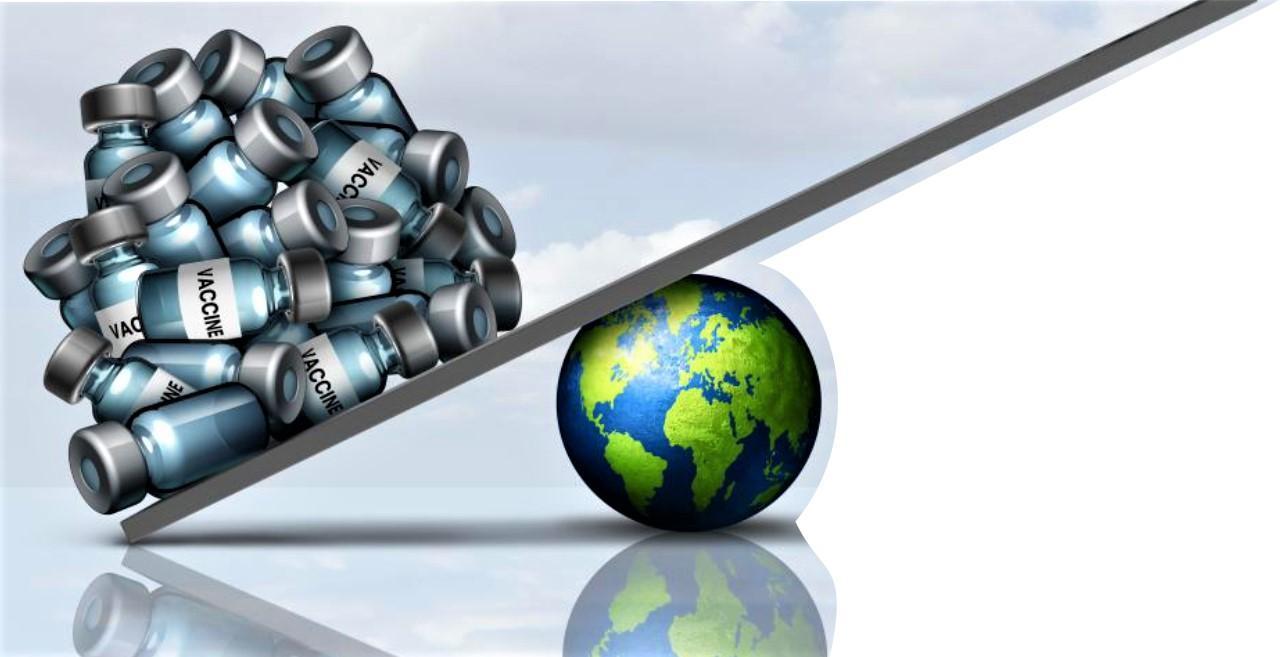 Although there exists no international patent, there are several ways to ensure protection in different parts of the world. The first global agreement regarding intellectual property rights is the Trade-Related Aspects of Intellectual Property Rights (TRIPS) and was introduced by World Trade Organization — it became effective from 01 January 1995. This agreement brought the institutions of neo-imperialism once again at play. In pharmaceutical patents, when a company develops a cure for any disease, the state grants the creator exclusive rights for a specific time to produce and charge whatever price it wishes.
Coming back to the pandemic, one thing that was unanimously agreed upon by all was that no one was protected until everyone was. Hence, India and South Africa proposed to waive IP rights from some key components of the vaccine. Later, US president Joe Biden also backed this proposal to give a greater number of countries the ability to produce vaccines until the World Health Organization introduced the idea of developing ‘herd immunity’ against Covid-19. Unfortunately, other key global players such as the United Kingdom, Australia, Japan, the European Union and Canada, as well as big pharmaceutical companies spurned the proposal, citing various reasons. These companies claimed that lifting patents would hinder innovation and erode their profits. Although this might seem a selfish reason at first, there were some other more serious concerns as well which blocked such a move. Patents protect the basic blueprint of a vaccine and not the entire manufacturing process. Moreover, newer types of vaccines based on mRNA technology such as Moderna and Pfizer are difficult to comprehend and not many people understand how to make them. Developing a production process, getting manufacturing sites approved and procuring raw materials may take years. Thus, they asserted, lifting patents would be like revealing the recipe without access to ingredients and instructions. Such a scenario could have resulted in safety and quality issues or counterfeits in extreme cases and still taken time to produce enough vaccines for the population.
However, these hindrances, definitely, do not provide ground for blocking the transfer of useful technology. One way through which countries tried to circumvent patent restrictions was compulsory licensing. This kind of licensing allows anyone to make, use or send a patented product without the consent of the patent owner. WTO rules, as well, back this kind of, too, allowing governments to impose compulsory licenses on vaccine-makers, making it necessary for them to share information about the production process. However, in practice, there are numerous institutional barriers for developing and underdeveloped countries one of which is the heavy compensation to pharmaceutical companies for doing so.
Several efforts by the United Nations were made to make vaccines available to all human beings, regardless of race or nationality. Richer countries were compelled to export more vaccines and a campaign #stoptheblock was also launched so that no one was left behind in the fight against Covid-19. As part of its global goals, the UN urged the world nations to recognize the right to health all across the planet by 2030. The World Health Organization, alongside other partners, initiated Covid-19 vaccines global access, more famously known as COVAX, to accelerate the production and development of vaccines to ensure equitable supply. Other countries relied on voluntary licensing, for instance, the collaboration between Oxford-AstraZeneca and Serum Institute of India, to fulfil gaps in demand and supply.

The writer has done his LLB from LUMS and is, currently, a student at World Times Institute.