THE NELSON MANDELA RULES AND CRIMINAL JUSTICE SYSTEM OF PAKISTAN

AND CRIMINAL JUSTICE SYSTEM OF PAKISTAN

Internationalization of Criminal Justice
Legal philosophers like Kelsen and Professor H.L.A Hart of the University of Oxford had historically raised serious ontological questions about international law, questioning the very nature of its legal content as it lacked any enforcement and coercive power. This, however, has changed after new developments in international law when the actors in international arena started acknowledging ‘individuals’ as a subject of international law. Since that time, there has been steady internationalization of criminal justice through soft international law that has nudged states to conform to international standards set, agreed and advocated by the international human rights lawyers. In this context, one reference is the Compendium of United Nations Standards and Norms in Crime Prevention and Criminal Justice published initially in 1992, and lately in 2016 by the UNODC. The Compendium is a collection of all these standards and norms and is a basic document to refer to find the content on the subject. The whole movement towards internationalization of criminal justice started in 1955 when first Congress on Crime Prevention and Criminal Justice was organized. The purpose of highlighting this point is that while in theory it is believed that every state exercises its sovereignty primarily through criminal law and procedure, there have been consistent efforts by leaders of international legal order to affect the municipal legal orders. This effort, at international level, can be evaluated by its impact. In terms of Pakistan’s constitutional scheme, it may be noted that item 32 of the Federal Legislative List in Fourth Schedule of the Constitution of Pakistan, 1973, obliges the Federal Government to implement the international treaties and agreements. Whether these international treaties include international soft law emanating out of resolutions and declarations of the General Assembly of the United Nations is a question that begs interpretation. Likewise, as Pakistan is a federation where criminal law and criminal justice are on concurrent field in the light of articles 142 and 143 of the Constitution, it is yet to be seen whether prisons and corrections (being provincial entities) can be obliged to implement international minimum standards expounded by international legal instruments, which are less than a full-fledged treaty.

1. EXPANSIVE DEFINITION OF PRISONS
The discourse on criminal justice reforms in Pakistan is a specialized subject due to low rate of legal literacy and not very exemplary state of the rule of law. In this context, the Nelson Mandela Rules offers a very useful scheme that separates the categories of prisoners. The categories may be stated here to spur thinking and the expansive visualization of the rules to cover all categories of prisoners. The Rules are divided into two parts: Part I deals with general rights of prisoners and contain standards that must be adhered to in establishing a prison system; Part II deals with special categories of prisoners that include: (a) prisoners under sentence, (b) prisoners with mental disabilities/health conditions, (c) prisoners under arrest or awaiting trial (this includes persons arrested by police and persons sent to prison on judicial remand), (d) civil prisoners (very few in Pakistan’s legal system) and (e) persons under detention (see article 10 of the Constitution of Pakistan that envisages a detention regime along with arrest on criminal side and as per laws related to Punjab Maintenance of Public Order, 1960). Pakistan’s prison and police systems are governed and regulated by provincial governments, therefore, more advocacy at provincial level is required.

2. SPECIAL LAWS
Special laws on juvenile, women and transgender must be brought at par with minimum standards set by the Nelson Mandela Rules. For example, in the Juvenile Justice System Act, 2018, the rehabilitative aspects of juvenile prisoners are not detailed as required under the Nelson Mandela Rules. The special laws enacted by Provincial and Federal legislatures must try to conform to these standards and link the obligations with funding through budgetary grants to enable implementation as per international norms that are very much in line with humanistic, cultural and religious considerations of people in Pakistan.

EMPOWERING COMMUNITIES THROUGH RULE OF LAW 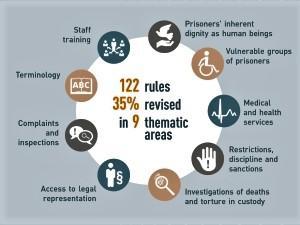 The talk on reforms in criminal justice system is already on the brink as communities are running out of patience, and the results are not impressive. In his book titled as ‘The End of Policing’, Alex S. Vitale talked about limits of police reforms. His observation about police reforms is interesting and can be adapted for general discourse on transforming the criminal justice system of Pakistan. He noted:
“Any real agenda for police reform must replace police with empowered communities working to solve their own problems … Communities must directly confront the political, economic and social arrangements that produce the vast gulfs between the races and the growing gaps between the haves and have-nots…”
The empowering of communities, in Pakistan’s context, can best happen by mainstreaming the rule of law. A rule-based order with arbiters of integrity can bring qualitative changes in criminal justice system. For this, the rule of law must be the guiding principle. The criminal justice system, which is essentially provincial in its orientation, must be brought at par in all provinces, and the federation should take lead in providing ecology favouring the rule of law as per its obligation under article 143 of the Constitution. The other limb of empowering communities surely lies with introduction of a detailed local government system that interacts with criminal justice system in collaborative manner.

The author is an independent researcher and has done his BCL from the University of Oxford. Email: kamranadilpsp@gmail.com