Russian President Vladimir Putin has formally signed a treaty annexing four Ukrainian regions into the Russian Federation. The Russian president announced, at a ceremony in Moscow’s Red Square, that the incorporation of Luhansk, Donetsk, Zaporizhzhia, and Kherson, in the south and east of Ukraine, into Russia is the “choice of millions of people” who share a “common history” with the Russian Federation. “We call on the Kyiv regime to immediately end hostilities, end the war that they unleashed back in 2014 and return to the negotiating table. We are ready for this,” Putin said, adding that “we will not discuss the choice of the people.”
Background
In September, Russian-backed separatists held referendums in the occupied areas of eastern Ukraine. The Russian-run referendum votes took place over five days, from Sept. 23 through Sept. 27, despite international outrage. While announcing the result, the Russian state media said that the people of the said four regions have voted overwhelmingly in favour of joining the Russian Federation. The results showed over 98% voting in favour of the measure in the self-proclaimed Donetsk and Luhansk People’s Republics; while 93% voted for it in the Zaporizhzhia region and 87% in the Kherson region.
The annexation
Russia has annexed around 15% of Ukraine that its forces control as well as about 3% of Ukraine that it does not control – including front lines where Ukrainian soldiers are still fighting, for example in the Donetsk region. Taken together, Russia has annexed at least 90,000 sq km of Ukrainian territory.
The borders of the territories Russia is claiming still remain unclear, but the Kremlin has vowed to defend Russia’s territory — the newly absorbed regions, too — with any means at its disposal, including nuclear weapons.
The annexed areas include:
· A big chunk of eastern Ukraine, known as Donbas, is where high concentrations of ethnic Russians and Russian-speaking Ukrainians live.
· The two parts of the Donbas now include the self-styled Donetsk (DPR) and the Luhansk People’s Republics (LPR), which Putin recognised as independent states just before the February 24 invasion. A frontline runs through Donetsk.
Why Putin did it?

For Putin, there are tactical benefits of annexing Ukrainian territory now. By doing so, Russia could name any efforts to retake them as direct attacks on its territory, thereby increasing the risk of direct military confrontation with NATO. Putin’s move before winter sets in could allow him to reorganize and revitalize his war efforts in preparation for spring. Moscow has already sought to replenish its diminished forces by announcing a “partial mobilization” of Russian citizens.
The Russian leader called on Ukraine to end hostilities and hold negotiations with Moscow — but insisted that the status of the annexed territories was not up for discussion. “I want the authorities in Kyiv and their real overlords in the West to hear me: The residents of Donetsk, Luhansk, Zaporizhzhia and Kherson are becoming our citizens,” Putin said.
By annexing Ukrainian territory, Putin is giving himself further justification for the mobilization—one that not only supports the continued invasion of Ukraine, but also defends Russia’s newly acquired sovereign territory. Putin may also hope that the move will boost support for the war both domestically and among Russia’s limited international allies, such as China and India, both of which have expressed waning patience with the protracted invasion.
Analysts say that Russia’s recent military setbacks have pushed Putin into a corner. He can either accept the losses or increase the stakes. By claiming territory as Russian land, he can justify an escalation in fighting as an attack on Russian soil. This may pause Ukraine and its Western backers. Fighting a war on what Moscow considers its territory may lead to a full-scale conflict that may lead to limited use of nuclear weapons.
What does this mean?
Russia’s attempt to annex southern and eastern Ukrainian territory signals the Kremlin’s commitment to the offensive
Taken together with Putin’s decision to call for a partial mobilisation of Russian reserve troops, it means that the war is far from over. Ukraine’s victories in recent weeks had sparked hopes that Russia’s precarious military position could force it to come to the negotiating table. If Putin pushes through the annexation of Ukrainian territory, analysts fear, there will be no way out for Russia or Ukraine. Moscow will be forced to fight for what it claims as its territory while Ukraine will refuse to negotiate so long as Russia claims its land.
How has the world reacted?
As regards the referendum, Ukraine and Western governments have claimed that the votes were conducted at gunpoint and were bogus and illegitimate.
This latest move by Putin, accompanied by the recently announced partial mobilization in Russia and more nuclear threats, marks a new phase in the war in Ukraine. That is why it has received serious criticism from the countries world over.
1. United Nations
a. Secretary-General
United Nations Secretary-General called it a “dangerous escalation’ that would jeopardise the prospects for peace in the region. “The Charter is clear,” said the UN chief, “Any annexation of a State’s territory by another State resulting from the threat or use of force is a violation of the Principles of the UN Charter”.
b. General Assembly
The United Nations General Assembly voted to condemn Russia’s “attempted illegal annexation” and urged countries not to recognise the move. In the vote, held on October 12, three-quarters of the 193-member General Assembly — 143 countries — backed a resolution that also reaffirmed the sovereignty, independence, unity and territorial integrity of Ukraine within its internationally recognised borders. Four countries joined Russia in voting against the resolution – Belarus, Nicaragua, North Korea, and Syria. Another 35 countries abstained from the vote, including China, India, Pakistan and South Africa.
c. Security Council
On September 30, the Security Council held a vote on the resolution which described Russian attempts to unlawfully annex four regions of Ukraine as “a threat to international peace and security” and demanded that the decision be immediately and unconditionally reversed. Although the draft resolution, circulated by the United States and Albania, was supported by ten of the fifteen members of the Council, Russia vetoed it while four members – Brazil, China, Gabon and India – abstained.
2. United States
President Joe Biden has said the US will “never, never, never” recognize Russia’s claims on Ukraine’s sovereign territory. Biden denounced the referendums that pro-Russian forces conducted in occupied areas of Ukraine as an “absolute sham,” adding, “the results were manufactured in Moscow.”
The United States also announced “severe” new sanctions against Russian officials and the country’s defence industry in response to the Kremlin’s declaration that it has annexed four areas of neighboring Ukraine. “The United States is imposing swift and severe costs on Russia,” the White House said in a statement. It also announced that G7 allies support imposing “costs” on any country that backs the Kremlin’s attempt to incorporate the Ukrainian regions.
3. EU
European leaders have denounced Russia’s annexation move.
Czech Republic Foreign Minister Jan Lipavsky, whose country holds the rotating EU presidency, rejected as “absolutely unacceptable” what he called the “one-sided annexation” following a “fully falsified process with no legitimacy”.
Danish Prime Minister Mette Frederiksen said Denmark “will never recognise any annexation attempt”.
4. G7
Foreign ministers of the Group of Seven (G7) countries slammed Russia’s proclaimed annexation of four Ukrainian regions as a “new low point” in the war and have vowed to take further action against Moscow.
“We will never recognise these purported annexations, nor the sham ‘referenda’ conducted at gunpoint,” said a statement from the top diplomats of Canada, France, Germany, Italy, Japan, the United Kingdom, the United States and the European Union.
“We will impose further economic costs on Russia, and on individuals and entities – inside and outside of Russia – that provide political or economic support to these violations of international law,” it added.
Can the West stop Putin? 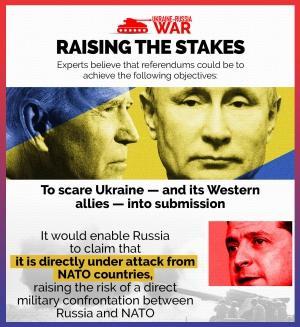 Neither the West nor Ukraine can stop Putin from claiming the regions, though the US and its allies say they want Ukraine to defeat Russia on the battlefield – and will help it do so by supplying weapons, but not NATO troops. The United States is prepared to impose additional economic costs on Russia in conjunction with US allies if Moscow moves forward with annexing portions of Ukrainian territory, the White House said.
After imposing sanctions on Russia, though, there is not much economic punishment left to inflict unless the US could get China and India to agree to some cap on the price of Russian energy. The West could send more advanced weapons to Ukraine.
Conclusion
Moscow’s annexation of four Ukrainian regions will only add fuel to the fire. President Putin’s action sets a negative precedent where other occupied or contested regions of the world are concerned. With the annexations, the Russian leader has given his foes an excuse to speed up the process.
It is evident that neither Nato nor Russia will settle for anything less than total capitulation of the other in this grinding conflict. Chances of a peaceful settlement are extremely slim; instead, there is an increasing possibility of the Ukraine conflict transforming into a much larger war. It must also be said that Russia’s move to annex Ukrainian territory gives other states the green light to illegally devour land that does not belong to them. Palestine and Kashmir top the list of these occupied territories, as Israel and India can point to the Ukrainian example to justify their patently illegal occupations. This bodes ill for the subjugated people of Palestine and India-held Kashmir, who have been largely forgotten by the international community, and are left to face their oppressors on their own.
The writer is a Lahore-based professor of Political Science.