Rights of women in Islam

Rights of women in Islam

Rights do not come alone; they are a package with corresponding sets of responsibilities. Hence, women do have their rights and duties under Islam. The legal status of a woman is the same as that of a man in Islam. Both are subjected to the same kind of punishment for a particular crime.
“As for male and female thieves, cut off their hands for what they have done—a deterrent from Allah. And Allah is Almighty, All-Wise.” (Al-Maidah:38)
A woman has a right to be witness in court.
Islam as a political and social system is the first and the only religion that gives respectable status to women.
Islam gives complete protection to women against all unfounded allegations and accusations. No one can accuse a chaste woman so easily and with impunity.
“Those who accuse chaste women of adultery and fail to produce four witnesses, give them eighty lashes each. And do not ever accept any testimony from them—for they are indeed the rebellious.” (An-Nur: 4)
Islam defined the rights of women in the following four capacities:
As a mother: she enjoys extreme respect from her children.
As a daughter: her upbringing, education and maintenance is the responsibility of her parents and other members of her family.
As a sister: she is the custodian of the honour of her brothers.
As a wife: she has the right to be looked after by her husband.
Islam granted a number of rights to women. These rights have been explained one by one in detail.
Right to life 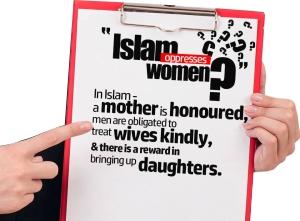 Before the advent of Islam, the practice of femicide (female infanticide) was followed in Arab society. Girls were buried alive. Their birth was considered a social stigma for the parents. Islam declared it an inhuman practice and put an end to it.
Now see the situation in the First World – wealthy industrialized capitalist countries. On June 24, 2022, the US Supreme Court overturned the 1973 ruling known as Roe v Wade that had allowed women the right to choose abortion. The US Supreme Court held that abortion was illegal. This is what Islam had declared more than fourteen centuries ago. Islamic principles are universal and valid for all the times to come.
In the following verse of Holy Quran, Allah Almighty has categorically declared that the life of one person is equal to the life of the whole of mankind. No distinction has been made on the basis of gender.
“That is why We ordained for the Children of Israel that whoever takes a life—unless as a punishment for murder or mischief in the land—it will be as if they killed all of humanity; and whoever saves a life, it will be as if they saved all of humanity. Although Our messengers already came to them with clear proofs, many of them still transgressed afterwards through the land.” (Al- Maidah:32)
Similarly, Allah Almighty has forbidden the believers from doing certain things; taking life without legal right is also mentioned in the following verse:
“Say, ‘O Prophet,’ “Come! Let me recite to you what your Lord has forbidden to you: do not associate others with Him in worship. Do not fail to honour your parents. Do not kill your children for fear of poverty. We provide for you and for them. Do not come near indecencies, openly or secretly. Do not take a human life—made sacred by Allah—except with legal right. This is what He has commanded you, so perhaps you will understand.” (Al- Anam:151)
Right to fair upbringing
Narrated Hazrat Aisha (RA): “A lady along with her two daughters came to me (Aisha) asking for some alms, but she found nothing with me except one date which I gave to her and she divided it between her two daughters, and did not eat anything herself, and then she got up and went away. Then the Prophet (PBUH) came in and I informed him about this story. The Holy Prophet (PBUH) said, “Whoever is put to trial by having to raise daughters and he treats them generously (with benevolence), then these daughters will act as a shield for him from Hell-Fire.” (Al-Bukhari, Hadith-5569)
Right to knowledge
Islam sanctioned that it was the duty of every believer to acquire knowledge irrespective of one’s gender.
Right to choose the spouse
Islam has granted a woman the right to choose her life partner. A woman cannot be compelled to marry a man against her will.
In addition to this, women have the right to take Khullah by which they can get separated from their husbands in case they think that they cannot live together.
Right to inheritance 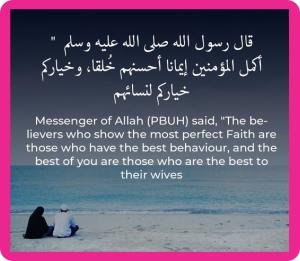 The Holy Quran gives clear instructions on the law of inheritance. Women have been granted the right of inheritance which no other system had ever granted.
“Allah commands you as regards your children’s (inheritance); to the male, a portion equal to that of two females; if (there are) only daughters, two or more, their share is two-thirds of the inheritance; if only one, her share is half. For parents, a sixth share of inheritance to each of the deceased left children; if no children, and the parents are the (only) heirs, the mother has a third; if the deceased left brothers or (sisters), the mother has a sixth. (The distribution in all cases is) after the payment of legacies he may have bequeathed or debts. You know not which of them, whether your parents or your children, are nearest to you in benefit, (these fixed shares) are ordained by Allah. And Allah is Ever All-Knower, All-Wise.” (An-Nisa:11)
Other detailed law has been laid down in verse 12 of Surah An-Nisa as under:
“In that which your wives leave, your share is a half if they have no child; but if they leave a child, you get a fourth of that which they leave after payment of legacies that they may have bequeathed or debts. In that which you leave, their (your wives) share is a fourth if you leave no child; but if you leave a child, they get an eighth of that which you leave after payment of legacies that you may have bequeathed or debts. If the man or woman whose inheritance is in question has left neither ascendants nor descendants, but has left a brother or a sister, each one of the two gets a sixth; but if more than two, they share in a third; after payment of lagacies he (or she) may have bequeathed or debts, so that no loss is caused (to anyone). This is a Commandment from Allah; and Allah is Ever All-Knowing, Most-Forbearing.”
These commands of the Almighty are binding upon all the believers, and there is no exception to it.
“These ‘entitlements’ are the limits set by Allah. Whoever obeys Allah and His Messenger will be admitted into Gardens under which rivers flow, to stay there forever. That is the ultimate triumph!” (Surah An-Nisa:13)
“But whoever disobeys Allah and His Messenger and exceeds their limits will be cast into Hell, to stay there forever. And they will suffer a humiliating punishment.” (Surah An-Nisa:14)
Restrictions on having more than four wives
Before the advent of Islam, men used to have many wives. Islam laid down the rules of marriage, and imposed a restriction that a man could not have more than four wives at one time.
Right to fair treatment
“O believers! It is not permissible for you to inherit women against their will or mistreat them to make them return some of the dowry as a ransom for divorce—unless they are found guilty of adultery. Treat them fairly. If you happen to dislike them, you may hate something which Allah turns into a great blessing.” (Surah An-Nisa:19)
Conclusion
Islam is the only social and political system that has granted rights to women. The rights granted by Islam are universal and valid for all times to come. Certain cultural practices that discourage or deny rights to women should not be construed as Islamic teachings.
I would conclude my article with the following verse of Holy Quran. Allah Almighty says in Surah Al-Baqarah verse 187:
“They are a clothing for you and you are a clothing for them.”

The writer is a civil servant, belonging to Police Service of Pakistan (PSP). He can be reached at: asimjasraa@gmail.com