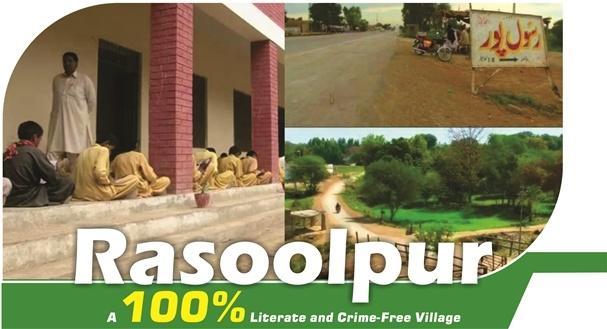 Rasoolpur A 100% Literate and Crime-Free Village

A 100% Literate and Crime-Free Village

There is hardly any news in our mainstream media from small villages located in far-flung areas of the country. And, even if there is some, it is often a bad news. Due to this reason, we fail to know about the miracles being done in our remote areas. One such example is the Rasoolpur village of Rajanpur district. With a 100% literacy rate and 0% crime rate, this village can be a great model of a perfect civilization for the whole world.

Tucked into a remote corner of Pakistan’s Punjab province, this small village has achieved two milestones few developed countries can boast. With 100% literacy rate and 0% crime rate, the village of Rasoolpur, located in Jampur Tehsil of Rajanpur district, represents Pakistan’s actual image in the whole world. The village has a perfect literacy rate at a time when, according to the Pakistan Social and Living Standards Measurement Survey, that in the country is hovering around 60%, having remained stagnant since 2014-15.
The village has a population of 2,500-3,000 people, with most of its residents being ethnic Ahmadani Baloch whose ancestors migrated from Balochistan to Southern Punjab in 1933-34. At that time, they had no permanent source of income, so education became their tool to earn a living.
To encourage the children and their parents to continue this decade-old commitment to education, the community organizes a special event on Sept. 08 to mark the International Literacy Day. During the celebrations, they congratulate each other and show appreciation for school teachers. They also appreciate students who have achieved positions in competitive university-level exams. Encouraging the students and showing them the success stories of their elder siblings make them achieve even higher goals.
Currently, Rasoolpur has two high schools and a primary school, having strength of around 30 students each. All the children, as soon as they reach the age of 4-5, start their education. The villagers do not believe in how the United Nations defines literacy – as the ability to sign one’s name – every person of this village has to finish high school, otherwise, the elders do not give them permission to participate in the society. It is due to this reason that all the women of the village are educated which shows that they understand the importance of women’s education as well.
After students complete high school, they go to a college in the nearest township of Jampur city, which is 8-10 kilometres (5-6 miles) away.
The village also has its own league called the Rasoolpur Development Society which is responsible for collecting donations for the people who cannot afford education. Society also makes sure that no one drops out of school.
Meanwhile, a 100% literacy rate is not the village’s only achievement. The police station of this model village has not registered a single criminal case in the last 100 years, which shows how being responsible for other people’s rights is everyone’s concern. The reason is that the people have a strong network of communication passed down by their ancestors. No one tries to cross the line when it comes to maintaining law and order. This is the rule that has enabled the village to attain a 0% crime rate.

All in One Book-14 Annual Edition