Introduction
Ever since the Taliban took over Kabul on August 15 last year, the world community has been concerned, and rightly so. However, those who were closely following the events occurring in Afghanistan saw the takeover coming a mile away. Nonetheless, the agility with which the Taliban captured territory after territory and finally Kabul, shocked everyone, because it was expected that the 300,000-strong Afghan National Army, which was assisted and funded by the United States, would not only put up a fight against the Taliban but will also push back and, at least, contain the insurgency to rural areas far from urban centres. Meanwhile the Taliban, carrying on the momentum, not only consolidated their hold over the captured areas but also conquered the Panjshir Valley, a stronghold of the revered freedom fighter Ahmad Shah Massoud whose son Ahmad Massoud was leading the resistance against Taliban. Nevertheless, with the Taliban striking a deal with the United States in Doha in 2020, it was an awkward situation for the Ashraf Ghani-led government because US negotiated the withdrawal of its troops from Afghanistan in accordance with the Doha peace deal (facilitated by Pakistan), without taking the Ghani government on board. And the chaos that followed the US withdrawal left the Afghan civilians fearing for their safety because of the absence of any formal government following the collapse of Afghan government after President Ashraf Ghani’s flight from Kabul, allegedly with millions of dollars in cash.
But not everything about the recent crisis is new. The instability in Afghanistan has been lingering on for decades now. 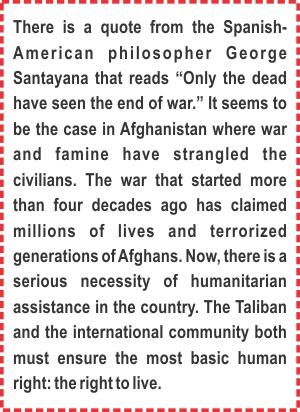 The instability in Afghanistan can be traced back to when King Mohammed Zahir Shah was overthrown by Mohammed Daoud Khan in 1973 who then became president of the newly-declared republic. In 1978, he too was assassinated in a coup that brought Nur Muhammad Taraki of PDPA (People’s Democratic Party of Afghanistan) into power. However, his rule was short-lived as he was killed in September 1979 resulting in Hafizullah Amin taking over the reins of the government. This power struggle had already turned violent with ordinary civilians suffering from unrest, following which, the USSR (United Socialist Soviet Republics) invaded Afghanistan in December 1979. During this invasion, President Hafizullah Amin was killed & Babrak Karmal became the president.

Soviet Invasion
As the Soviet occupation of Afghanistan prolonged, the people of Afghanistan launched a freedom struggle against the USSR, because it is against their traditions to accept foreign occupation of their land. In the said struggle, the freedom fighters (alternatively called Mujahideen) enjoyed active support in terms of arms, ammunition and funding from various countries including the United States, Pakistan, and Saudi Arabia. This support allowed them to inflict huge losses on Soviet troops in terms of lives and equipment. The tide of war shifted towards the Mujahideen when in 1986, the same year Babrak Karmal was replaced by Dr Najibullah as president, they were provided with the Stinger Missiles by the US. As the decade approached its end, it became increasingly difficult for the USSR to continue and sustain its occupation of Afghanistan. In 1988, Geneva Accords paved the way for withdrawal of Soviet troops from Afghanistan. On February 15, 1989 the soviet army completed its withdrawal. This marked the end of Soviet occupation of Afghani-stan after more than nine years. 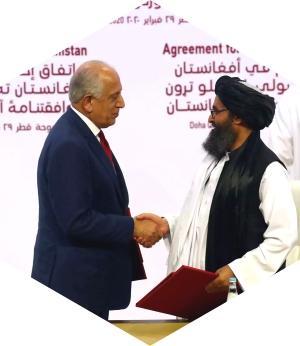 After the Soviet withdrawal, the Mujahideen split into various factions led by different commanders and chiefs, including the likes of Gulbuddin Hekmatyar, Burhanuddin Rabbani and Ahmad Shah Massoud who had fought against USSR. Now, with the weakening government of Dr Najib, the internecine war was inevitable which brought the Mujahideen factions at odds with Dr Najib’s government as well as with each other. This infighting further deteriorated the security situation in Afghanistan. In April 1992, Dr Najibullah resigned and Northern Alliance (the faction led by Ahmed Shah Massoud) took over the capital, Kabul.
The nine-year war against USSR and the civil war that followed, took its toll on the Afghan civilians who were compelled to leave their homes and seek shelter and refuge in neighbouring countries, mainly Pakistan which is home to more than three million Afghan refugees.

Emergence of Taliban
During the scramble for Kabul, the Mujahideen factions were engaged in a civil war. These factions started to lose control over their territories especially in rural areas, where local warlords and chieftains gained control. Meanwhile, along the Durand Line, on both sides of the Pak-Afghan border, there were Madrassahs (religious schools) from where emerged the Taliban. They first established their control over Kanda-har. In 1996, Taliban captured Kabul and established their version of Shariah (Islamic Law) in most of Afghanistan. Their rule was characterized by absence of most civil rights and liberties. They ruled Afghan-istan till the US invasion in 2001. 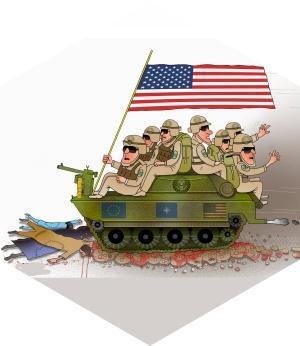 The US right after the 9/11 terror attacks ascertained that Osama bin Laden, or OBL, was behind those coordinated attacks. And because the Taliban were not handing him over, US launched a full-scale invasion of Afghanistan in October 2001. The Taliban regime was ousted and most of their leadership went into hiding. US spent two decades (even after having eliminated OBL in 2011) in establishing a system that suited their interests rather than eliminating terrorism and primarily going after terror outfits operating from within Afghanistan. This is evident from the fact that even after years of instability and war, peace is no-where to be found. The US supported and funded the Afghan National Army which laid down arms with-out putting up a fight. The reason was not because the army was incapable or the soldiers were afraid to fight. Afghans are one of the bravest people. The reason ANA surrendered to the Taliban was because there was nothing left for them to fight for. They had lost their faith in the system that was corrupt to the core. Meanwhile, the Taliban, an indigenous insurgency, used to carry out guerrilla attacks on American and Afghan soldiers. The US army and ANA had a tough time locating and eliminating their hideouts given the rugged and mountainous terrain of Afghanistan. This war proved costly to the US which had poured more than two trillion dollars into Afghanistan to sustain a crumbling system. Adding insult to injury, ter-rorism was rampant due to the presence of terrorist organizations such as ISIS and TTP in Afghanistan as the US was negotiating its withdrawal from Afghanistan with the Taliban.

High stakes for Pakistan
As America’s Operation Enduring Freedom gained momentum, the airstrikes on Tora Bora hills forced the Taliban insurgents and Al-Qaeda terrorists to flee the hills and cross the border into Pakistan, where there were thousands of valleys for them to hide in. They were able to cross the Durand Line given that there was virtually no mechanism for the security forces to distinguish between (potential) terrorists and innocent civilians (refugees). This scenario coupled with lack of security checkpoints on highways in the border areas

on the Afghan side emboldened the insurgents and terrorists along with civilians to enter Pakistan un-checked. Many of them considering Pakistan a US ally (which it was) declared war on Pakistan for supporting the United States. These terrorists found sympathisers in Pakistan as well. Several terrorist factions under the umbrella of TTP (Tehreek-e-Taliban Pakistan) started operating. The decade following the 9/11 terror attacks saw an exponential increase in terrorist activities across the country in which major military installations, including the GHQ, as well as civilian targets were attacked. They attacked civilians, military personnel, law enforcement agencies (LEAs), educational institutes, public parks, pretty much anywhere they got lucky enough to evade the security forces or where there was a lapse in security measures. The attacks were indiscriminate whose objectives were to create panic and chaos in the country in order to pressurize the government into accepting and recognizing the horrific crimes they had been committing in the name of Shariah (Islamic Law) even though they had nothing to do with Islamic Law or Islam or Law. They had established a system, in areas under their control, parallel to that of the state of Pakistan. They had become a serious threat to the sovereignty of Pakistan.
This was the background against which the government launched large scale military operations (after several peace agreements having been dishonoured by the militant groups) in order to thwart the onslaught of terrorist attacks.

These operations were an array of offensives against the militant groups in which their hideouts were targeted through airstrikes followed by ground assault. Most of the groups were based in populated areas across the erstwhile FATA. A lot of civilians had to be relocated during these operations. These internally displaced persons (IDPs) are still being rehabilitated years after completion of military operations and clearance of their areas.

Pakistan had to bear a loss of more than eighty thousand lives in the war against terrorism. As the government in Afghanistan, aided by United States, was unable to control the militants owing to the instability and lack of control on their territory, terror outfits based in Afghanistan planned and executed thousands of attacks across Pakistan. Pakistan had to reorganize and revamp its military on a large scale in order to meet the growing challenges and countering the threat posed by terrorism.

Thanks to the fifteen-hundred-mile Pak-Afghan international border, the presence of terrorist organizations on either side of the border means terrorism in the whole region as is the case here. Due to extensive military operations undertaken by Pakistan, in which we lost thousands of our officers, men and civilians, there is no room for any terrorist organization to execute their evil designs. Now, their rat-holes are being destroyed through various Intelligence-based-Operations (IBOs). On the contrary, in Afghanistan, the coalition forces had pretty much all of Afghanistan under their control but this control could not be translated into stability. The terrorist outfits kept, and still are, operating from inside Afghanistan and spreading terrorism in the whole region especially Pakistan which, as stated earlier, shares a 1500-mile border with Afghanistan. The presence of these terrorists on Afghan soil indicates a great threat to Pakistan owing to which Pakistan undertook a massive project to fence the border in order to enhance border surveillance.
As the situation in Afghanistan directly affects Pakistan, Pakistan has remained a major stakeholder in the Afghan Peace Process. Pakistan would be the prime beneficiary of stability in Afghanistan after the Afghan people. Therefore, it has been advocating for peace for a long time because a stable Afghanistan would mean a great deal of trade and transit through the war-ravaged country. Pakistan was the prime facilitator of the Doha peace deal between US and the Taliban. 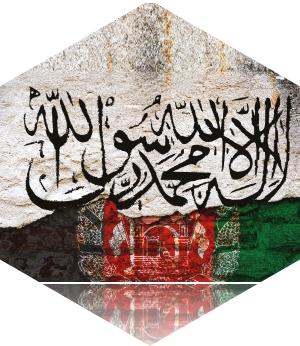 After more than four decades of war, Afghanistan is facing an unprecedented crisis in terms of security situation and food shortages in addition to the already rampant corruption and subsequently plummeting civil and social services.
The International Community and Taliban bear the responsibility for a peaceful and stable Afghanistan. The Taliban are seeking recognition of their regime, which lies with the regional countries as well as global powers. The regional countries which are inclusive of the neighbours of Afghanistan (including Pakistan, Iran, China and some Central-Asian states like Turkmenistan, Uzbekistan, and Tajikistan) are the key stake-holders in the peace process. The primary stake of these countries will be border security and mitigation of terrorism in the region and beyond, but in the meantime, they must not forget about the Afghan civilians who have been most adversely affected by this instability. This is the least these stakeholders can do to alleviate their suffering. In years to come, a stable Afghanistan will contribute pragmatically in the global fight against terrorism.

The writer is a student at the Department of Electrical Engineering in University of Engineering and Technology (UET), Lahore.