On 26 September, leaks were discovered in the underwater Nord Stream 1 and 2 gas pipelines, located near Denmark and Sweden. Both pipelines are owned by Russia and were built to transport natural gas from Russia to Germany through the Baltic Sea. Western officials have linked the incidents to “sabotage” but have held back from attributing responsibility for the blasts. Russian President Vladimir Putin has blamed the United States for the attack. “The act of sabotage of the Nord Stream 1 and 2 is an act of international terrorism aimed at undermining energy security of the entire continent by blocking supplies of cheap energy,” Putin said, alleging that the US wants to force Europe to switch to importing more expensive liquefied natural gas (LNG). Putin said the US and countries with alternative energy supply routes in Europe, including Ukraine and Poland, as “beneficiaries” of the disruption of Nord Stream pipelines.
The US has previously denied accusations that it was responsible for the blasts.
Although neither of the two pipelines was operating at the time, both were still full of gas, which bubbled to the surface in an area a kilometre wide on the sea’s surface. Seismologists reported underwater blasts before the leaks emerged. Denmark’s Defence Command has released footage of the leaks which shows bubbles – the largest is one kilometre (0.6 miles) in diameter – at the surface of the Baltic Sea. The European Space Agency estimated that the emissions leak from the Nord Stream gas pipelines was roughly equivalent to one and a half days of global methane emissions.
What are the Nord Stream Pipelines?
Ø Nord Stream consists of two pipelines, which have two lines each.
· Nord Stream 1 is a 1,224km underwater gas pipeline running from Vyborg in northwest Russia to Lubmin in northeastern Germany via the Baltic Sea. It was completed in 2011.
· Nord Stream 2 which runs from Ust-Luga in Leningrad to Lubmin was completed in September 2021 and has the capacity to handle 55 billion cubic metres of gas per year once it becomes operational.
Ø The twin pipelines together can transport a combined total of 110 billion cubic metres (bcm) of gas a year to Europe for at least 50 years.
Ø The Nord Stream crosses the Exclusive Economic Zones (EEZs) of several countries including Russia, Finland, Sweden, Denmark and Germany, and the territorial waters of Russia, Denmark and Germany.
Ø In Germany, the pipeline connects to the OPAL (Baltic Sea Pipeline) and NEL (North European Pipeline) which further connects to the European grid.
Impact of Ukraine war
Against the backdrop of a rapidly unfolding flywheel of mutual restrictions and diplomatic confrontation between Russia and the West since the start of the special operation in Ukraine, the Nord Stream gas pipeline has found itself at the centre of an already-difficult and unpredictable political-sanction clinch between the Euro-Atlantic allies and Moscow.
Russia had already decreased the supply of gas to Europe after the European Union imposed sanctions on Moscow for invading Ukraine. Flows via Nord Stream 1 were reduced to 20% of its capacity in July 2022. 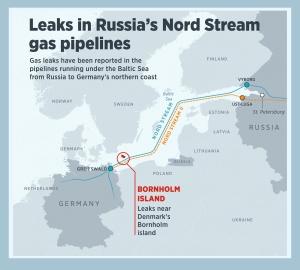 In August 2022, Russia further plugged the supply and stopped Nord Stream 1 completely, citing maintenance. Gazprom had reasoned that an oil leak in a turbine on the Nord Stream 1 pipeline was behind the closure. The Nord Stream 2, despite being completed, could not become operational after Germany pulled out of the project after Russia invaded Ukraine. The stream was supposed to double Russia’s energy export to Europe to 110 billion cubic metres. The short supply of the gas pipeline resulted in a sudden hike in energy prices in Europe. With the shutting down of the Nord Stream pipeline, Europe faces a tough time ahead with winter approaching.
Significance for Europe and Russia
a. Europe
While Russia is still pumping gas to Europe via Ukraine, the explosions on the Nord Stream pipelines have exacerbated acute energy shortages faced by the EU’s 27 member states as winter on the continent looms.
Europe requires more than 100 billion cubic metres (bcm) of natural gas each year and around 40% of its gas comes from Russia. Over the last few years, Europe has become more dependent on gas imports because of a decrease in domestic gas production. Reducing dependence on Russian gas is difficult as there are no easy replacements. Many European businesses have large investments in Nord Stream 2 and there is pressure on governments from these businesses. Finally, a reduction in gas from Russia would increase already high gas prices and that would not be popular domestically.
b. Russia
Around 40% of the budget of Russia, which has the largest natural gas reserves in the world, comes from sales of gas and oil. Nord Stream 2 is important because it eliminates the risks related with sending gas through transit countries, cuts operating costs by doing away with transit fees and gives direct access to its most important European customer, i.e. Germany. It increases Europe’s dependence on Russia while giving it a reliable customer.
Possible impact
a. On Europe
The aggravation of relations between Russia and the West has led to an unprecedented crisis concerning the supply of Russian gas to the European Union. Large-scale sanctions have significantly hampered the maintenance of gas pipeline infrastructure, and the sabotage of the Nord Stream 1 and Nord Stream 2 pipelines has called into question the very possibility of deliveries along these routes in the foreseeable future. Taking into account a combination of political factors, the volume of gas exports from Russia to the EU will be significantly reduced. Both sides face the task of finding alternative partners. The EU needs reliable new suppliers of gas or other energy sources that could compensate for the deficit, and Russia needs new markets.
b. World
The United Nations has warned that damage to the Nord Stream pipelines can exacerbate price volatility in energy markets in Europe and around the world. In an emergency meeting of the UN Security Council, UN Assistant Secretary-General for Economic Development Navid Hanif briefed the 15-member body on three possible potential effects of the leaks:
1. Leaks increase concerns regarding uncertainty in global energy markets which could lead to higher price volatility.
2. The potential environmental impact of the leaks is a matter of concern. ‘Discharge of hundreds of million cubic metres of gas into the atmosphere would result in hundreds of thousands of tonnes of methane emissions.
3. Vulnerability of critical energy infrastructure.
Conclusion
Although President Putin has offered to supply gas to the West, a resumption of gas supplies is unlikely. Recently, in his address to the Moscow energy forum, the Russian president said, “Moscow is ready to resume gas supplies to the European Union via a link of the Germany-bound Nord Stream 2 pipeline under the Baltic Sea,” but this offer was quickly rejected by Germany. “Independently of the possible sabotage of the two pipelines, we have seen that Russia is no longer a reliable energy supplier, and that even before the damage to Nord Stream 1 there was no longer any gas flowing,” government spokeswoman Christiane Hoffmann said.
This all means that world energy market should prepare itself for a crisis that is looming large on the horizon.