An attempt to enrage the Dragon

Although experts in international relations and political scientists believe that economic engagement is the best way to avoid a war, the assertion seems to prove wrong. There was a consensus, just a few years ago, that if an established superpower builds strong trade and investment ties with a newly emerging one, the ideological differences would fade away. But, in the case of US-China conflict, this seems a flawed approach. It is true that despite their differences, both countries have been working together on some of the world’s biggest problems, e.g. Beijing and Washington announced their cooperation on climate change at the COP26 climate summit, saying that they would join forces to curb methane emissions, the Covid-19 pandemic also demonstrated the importance of the two nations collaborating on health security. But, of late, the United States is making all-out efforts to enrage China and trap it into a war that would mar the prospects of its rise. 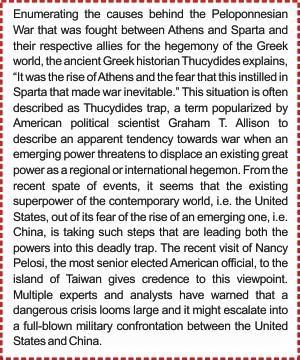 The recent visit of Nancy Pelosi, the Speaker of the US House of Representatives who stands second in line of succession for the US presidency, has further added fuel to this fire of antagonism and hostility. Although the visit was not without precedent as members of US Congress routinely travel to Taiwan, yet officials have generally avoided high-level visits – the last speaker to visit the Island was Newt Gingrich in 1997. Pelosi’s visit lasted only 24 hours but it will pose long-term challenges for the already tense relationship between Beijing and Washington, besides creating significant problems for Taipei, which looks set to suffer the worst of Beijing’s ire.

Taiwan must certainly recognize the reality that any effort to seek independence from China is fantasy which, if acted on, would trigger forcible reunification through military means. Pelosi’s visit was an exercise in moving the US away from its confusing policy of strategic ambiguity when it comes to the defense of Taiwan island, and as such a weakening of the fundamental precepts which sustain the One China policy, namely that Taiwan will never be independent. By hosting Pelosi, Taiwan sent a clear signal that it supported this revamping of US policy and, by extension, was seeking to move closer to independence.

China’s response makes it clear that “Taiwan’s independence” will never be accepted. Given the military and economic pressure being brought on Taiwan because of Pelosi’s visit, it is impossible to conclude anything other than that Pelosi’s visit has been a big loss for Taiwan. 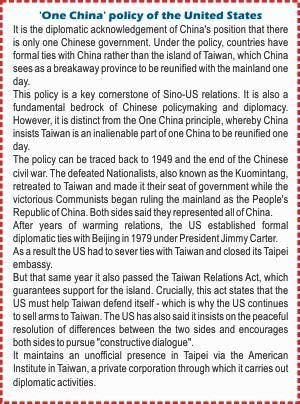 Even during her stay in Taipei, Nancy Pelosi made statements that were aimed at infuriating China. She vociferously stated that her visit was intended to make it “unequivocally clear” that the United States would “not abandon” the democratically governed island.

Pelosi, a vocal critic of China for decades, said in a statement after landing in Taiwan: “Sadly, Taiwan has been prevented from participating in global meetings, most recently the World Health Organization, because of objections by the Chinese Communist Party. While they may prevent Taiwan from sending its leaders to global forums, they cannot prevent world leaders or anyone from travelling to Taiwan to pay respect to its flourishing democracy, to highlight its many successes and to reaffirm our commitment to continued collaboration.”

Enraging the Dragon
Even when it was unconfirmed if Pelosi would visit Taiwan, Chinese President Xi Jinping, as well as China’s Foreign Ministry, had warned the US against sending a senior government official to the island that China considers its own province. Beijing was outrageous at this blatant breach of diplomatic norms as the United States still officially maintains its ‘One China’ policy adopted by President Jimmy Carter who recognised the People’s Republic of China in 1979 and agreed that his country would drop recognition of the “other” Chinese government in Taipei. While visiting Taiwan, Pelosi exploited various occasions to make outrageous slanders against China on issues including democracy, human rights, Hong Kong, Tibet, Xinjiang and religion, which reflected her long-standing, anti-China position.

Over the years, Pelosi has been using the anti-China card and China hate for political gains, and grossly interfered in China’s internal affairs. In 1991, Pelosi disturbed public order by grandstanding in the name of supporting so-called “democracy” during her visit to China. In 2008, she went out of her way to stir up trouble on Tibet, and urged President George W. Bush to boycott the Beijing Summer Olympics. In 2019, she met in Washington DC with anti-China, destabilizing forces from Hong Kong, and described the violent demonstrations in Hong Kong as “a beautiful sight to behold”. In 2019, she met with Rebiya Kadeer, a principal figure of “Xinjiang independence” separatists. In 2021, she played the same old trick by advocating a US “diplomatic boycott” of the Beijing Winter Olympics. On the Taiwan question, Pelosi’s influence is surely behind all the so-called “Taiwan-friendly” bills passed by the US Congress in recent years. 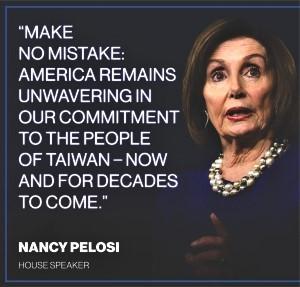 Ms Pelosi’s brief trip incensed Beijing, which views Taiwan as a breakaway province to be reunited with the mainland – by force, if necessary.

In response to the trip, China announced what it called “necessary and just” military drills in seas around 10 miles (16km) from Taiwan. China deployed scores of planes and fired live missiles near Taiwan in its biggest drills in the Taiwan Strait, a day after Pelosi’s trip to the self-ruled island. More than 100 warplanes and 10 warships took part in the live-fire exercises, with many apparently crossing the unofficial buffer zone between China and Taiwan.

Four days of live-fire exercises were followed by anti-submarine attacks and sea raid rehearsals as part of China’s furious response. The People’s Liberation Army statement promised to keep conducting “regular combat readiness patrols” in the Taiwan Strait.
China’s Taiwan Affairs office refused to rule out the use of force to retake the island.

Although the dire warnings against the speaker’s visit to Taiwan were probably overwrought, the general sentiment behind them was not misplaced. In the immediate aftermath of Pelosi’s trip, China, besides initiating a series of massive multi-day military exercises at multiple locations around Taiwan’s periphery, cancelled or suspended some exchanges with the United States, and announced that unspecified sanctions would be imposed against the speaker and her family. The sum total of these actions was intended to signal the intensity of CCP leaders’ anger but at the same time calibrated — at least in their minds — to avoid further escalation. But, they are playing a dangerous game since Taiwan is the focal point of elevated great-power competition and the most plausible location and trigger for a major military confrontation between the United States and China.

Both Washington and Beijing perceive that trends in bilateral relations vis-à-vis Taiwan are moving in the wrong direction and each blames the other for instigating this dangerous trajectory. More ominously, Beijing may soon reach a watershed moment regarding Taiwan, or it may have already reached this point and Washington has yet to recognize it.

Future scholars and analysts may well identify Beijing’s Taiwan tipping point as Pelosi’s August 2022 visit to the island. But, in the immediate aftermath of the visit, careful attention ought to focus on close monitoring of Chinese rhetoric and actions, as well as unambiguous and consistent US messaging. This effort is vital if the two countries are to avoid unintended escalation and unwanted war in the coming weeks, months and years.

“We will only be forced to take drastic measures to respond to the provocation of separatist elements or external forces should they ever cross our red lines,” said China’s first white paper on Taiwan in more than 20 years.

The policy document omitted a past promise not to send troops or administrators to Taiwan if it’s taken back – a sign that Beijing intends less autonomy for the island than previously promised.

Conclusion
Ms Pelosi’s visit to Taiwan Island, despite strong opposition from China, has escalated regional tension, plunged China-US relations to new lows and damaged US’ own interests. In its editorial “The US Relationship With China Does Not Need to Be So Tense,” the New York Times rightly pointed out that Pelosi made a provocative visit to Taiwan to underscore America’s support for its democratic government. It further stated: “It is in everyone’s interest for the two most powerful nations on Earth to find ways of easing these tensions. Over the past half century, beginning with President Richard Nixon’s seminal visit to China in 1972, the leaders of the United States and China have repeatedly chosen to prioritize common interests above conflict. Building this relationship, for all its flaws, has contributed much to the world’s stability and prosperity.”